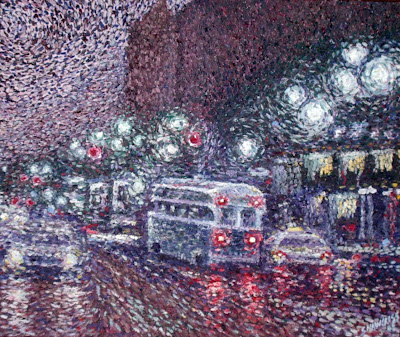 I have a show running at the following location: Pot-au-Feu Restaurant,(The Old Train Station) 819-459-2080, Wakefield, Quebec. To purchase one of Shawcross's paintings please contact Jo-Ann Oosterman at jo-ann@yogo.ca or call 613-231-1073 in Canada. We accept VISA and Mastercard. PayPal as well.


This is a strange painting of mine. It grows on you in some strange way. I was working rather hard in my "dotty" stage at this time trying to capture light at night. The auroras were a favorite for me. Then I moved into city lights. Then I moved into city lights in the rain. Weather adds that "other element" that directs my creativity I suppose. Being a maritimer changing weather figures into much of what I paint and write. I think I was onto something with my dotty lights but I moved forward again from that stage to the next. I never know what thing will emerge from my palette knife.

THIS SECTION OF THIS BLOG IS UPDATED TUESDAYS 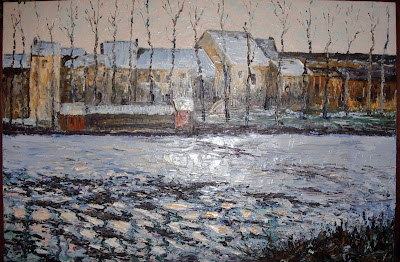 Winter at Moret (d'apres Cullen)
Posted by syl at 5:08 PM No comments:

THIS SECTION OF THIS BLOG IS UPDATED TUESDAYS. 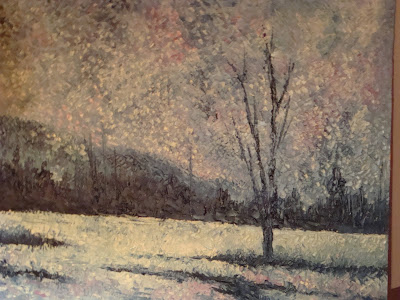 THIS SECTION OF THIS BLOG IS UPDATED TUESDAYS. 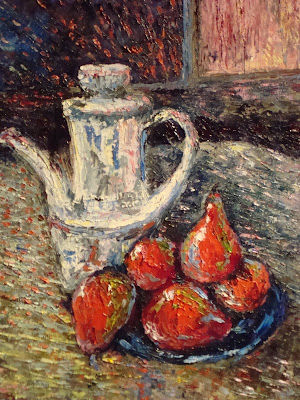 How I love to play with colour--the dabbing, splotting, slashing, smearing, the mudruckery of a palette knife on a surface. This painting is the result of Brenda Lee and I painting together at her studio one fine summer day. It's one of my favourites simply because of the playfulness I felt doing it. Sometimes I think that painting is a dreadfully selfish occupation that way. But then again, we share hopefully our passion with the viewer. My poor photography skills means the close-up of this picture fails to show some of the texture which is one of its better features I think. 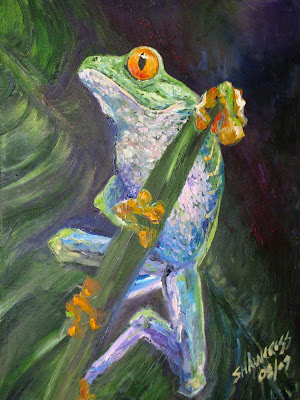 Frog Two / S. Shawcross / 8 x 10 / Oil on Canvas /
This frog is one of three I've painted. They made me happy when sometimes I was painting a dark November storm or a lonely northern landscape. Frogs, like birds and butterflies are amazingly beautiful creatures decked out all over the world in magnificent colours. This past summer I was able to see the live frog exhibit at the Museum of Nature here in Ottawa. A small adventure that filled my spirit oddly with amazement and light. The weird little wax money frog sitting stolidly under a leaf, the brilliant red and blues of the poison dart frogs, and of course these frogs I've painted. Pure wonderment. I may have to paint some more.
Posted by syl at 6:40 PM 1 comment: 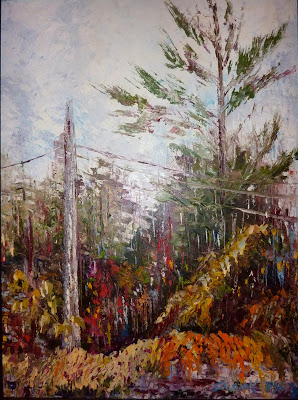 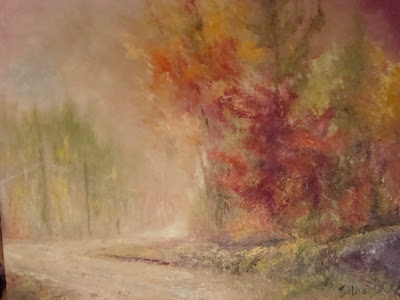 I've been painting off and on but certainly not as often as I wanted. My next exhibit I'm planning is "Faces of Chelsea". If you know of a good face in the area let me know. I live for character.
I have two paintings that were done on the side of the road while I was piggy-backing on the Artists in their Environment Tour, a most excellent venture. They are depictions of autumn in front of my house. A soft light of morning and the stark light of afternoon. In the first one (shown here as the second painting above) I had wanted to add a figure in the foreground to balance the picture but no one wanted me to... as if they wanted to wander unencumbered into the light at the curve of the road.

I sold the second one to a lovely couple newly arrived in Chelsea. The little baby in their knapsack is now a blond tousled little boy who runs with the other little wolves at the daycare. Time flashes. It does not trudge.